Happy long weekend! I love three-day weekends, even though I have so much to do that Monday is my only real down day. 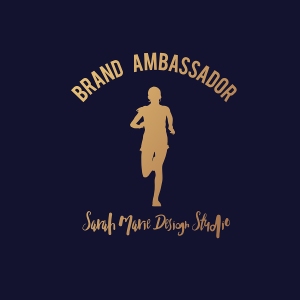 This week I got super exciting news that I was chosen as a Sarah Marie Design Studio ambassador! SMDS makes super snarky, funny, relatable running-themed products, like shirts, mugs, prints, totes and jewelry.

I love her design aesthetic — crisp, clean, bold, sleek. And I love the idea of supporting a female entrepreneur, someone who is turning her passion into a booming business. I’m so excited to see the growth and popularity of the SMDS brand and I love that the person behind it is someone with whom I know I’d be friends.

I love the sarcastic, tongue-in-cheek, inside-joke tone of the designs. There’s a feeling that running is an important part of life, but … it’s running. It’s something we do for fun, for pleasure, for the sheer joy of clicking off miles down endless roads with friends.

I love running. I really do. I also love beer, red wine (sometimes white, in the summer), margaritas (where’s that shirt?), Pilates, Orphan Black, reading, my couch … Recognizing that all those things exist in one person is not something our #fitspo world always understands. The cookie-cutter social media mold is strong: you’re either eating clean 24/7 and wearing a strappy bra — or you’re not trendy. I prefer to be myself, and that might involve a strappy bra or it might involve a shirt that says “Exercise is a dirty word that makes me want to wash my mouth out with chocolate” that I wear to teach Pilates.

So stay tuned — I’m excited to share lots of awesome Sarah Marie Design Studio products, and hopefully I’ll have some perks to throw your way, too. 😉

As I mentioned last week, making sure I’m recovering adequately is as important as the training itself, especially with the higher mileage I’ve been logging. This means getting enough sleep, because that’s when the magic really happens. All those millions of cells responsible for your muscles, your heart, your lungs, your blood vessels, need you to stop moving for a bit so they have time to adapt. And let’s be honest: Type A runners aren’t very good at sitting still. Or getting enough sleep, because, well, ain’t nobody got time for that.

But you have to.

My coach described sleep as “the most effective and most devalued recovery tool going.” Short change it at your own risk. You might think you’re Wonder Woman, doing just fine on 6 hours … but I’d wager you’d be doing even better on 8.

On that note, I did not run Monday morning. We have a standing 8 a.m. team meeting, so I was going to need to run around 5:30 a.m. to make that work and I just didn’t want to do that. Of course, the meeting got cancelled at the last minute which was frustrating. Instead, I went into the office early then left a little early. The heat index was around 100* and I knew I had to do Tuesday’s speed work in the morning, so I opted for the treadmill. Not running in that heat reduced the stress on my body and made it easier to keep my pace and heart rate under control.

Once I got home I went through a few Jasyoga Reset videos — calves, hamstrings, hips and quads. The quad reset was an eye-opener. Curse words were said.

Tuesday morning was mile repeats at 85% max HR with 3 minute recovery. Logistically, this was easier to do on the treadmill because it’s hard to run that fast in the dark! (Do you do speed work in the early morning? What’s your secret?) So back to the treadmill, round 2. In addition to having a fan, water bottle, towel and music, the treadmill also helps dial in pacing. I averaged 6:27 for the 5 intervals, average HR about 84%. #NailedIt I do think it’s a little harder to get up to speed on the treadmill, so I normally start a little under target pace and keep nudging it up through the interval. Then I’ll start the next interval another tenth of a mph faster, etc. When I’m outside, I tend to go out too fast, then try to readjust and slump a little in the middle, then press hard again at the end to get back where I wanted to be. The treadmill definitely helps me lock in those paces.

But this was a fair trade-off, because I had a massage at 4:30 that evening — that’s why speed needed to happen early. My massage therapist destroyed me. I was having some soreness in my glutes that didn’t seem to be directly related to running — as in, it didn’t hurt when I was running or seem to affect my running. Just other things. And she found plenty of other things to work on, too. I’m very grateful to have a great massage therapist and to be able to go every three weeks.

After combining mile repeats and deep tissue massage on Tuesday, Wednesday’s run was rough. The weather was beautiful but my run was not! Coach had scheduled 6-8 easy and I — atypically — opted for the shorter end. It would’ve been a good day to run after work, but I had Pilates to teach at 6 p.m.! My Wednesday class has been very full the past few weeks, so that’s great to see. It was also the first of five classes I taught this week — I agreed to sub on both Saturday and Sunday.

Thursday was a weird day schedule-wise, but the temps were supposed to stay low all day, so I opted to sleep in and run in the afternoon. I had a late afternoon meeting with the legendary Traci Falbo (stay tuned for a profile on her soon) and then ran after that. This run was 10 miles “moderate,” so around 70-75%, plus 10 strides. It takes me a bit to get going but after the first mile at 7:27, I averaged 7:06. My HR average for the run was 81%, a little high, but I felt good.

I had time to squeeze in a shower before Pilates Strength, combined for about 2 hours of exercise in total that afternoon.

Friday morning was a slow-and-steady 8 miles. We were out late for Chris’ birthday, so more sleep would’ve definitely helped this run. But it felt like fall!

Saturday was a killer. I had a great run — 14 miles total, 7 miles warm-up, 5 miles at 85% max HR, 2 mile cool-down. I wanted the interval section to simulate the half-marathon I’m racing on Sept. 17, so I imagined each mile represented about 3 miles of the race, with the last 1.5 miles representing the final 3 miles divided into half-mile chunks.

This allowed me to focus on how I want to feel throughout the race. Also, the temperatures were perfect to test my race outfit and shoes. The first 2 miles were calm and strong, staying relaxed early and not going out too hard. The third mile reminded me to stay focused in the middle part of the race, staying on the gas pedal but not too much. I have a tendency to lose focus in the middle, getting distracted and relaxing too much off the effort. Then I started easing the pace down, using the last 2400 meters to simulate that final 5k and visualizing that stretch of the race and the finish. It went so well I added another cool-down mile, haha. All my race gear performed perfectly, too.

I was also excited that I had plenty of time to shower and foam roll before teaching TWO Pilates classes back-to-back. It’s been a while since I’ve taught the Saturday double, and boy, it’s tough. But I had two great classes full of new faces and familiar faces, and had a great time. From there, it was straight to football, as my husband is a WVU alum and we organize the local game watches.

P.S. I basically slept the rest of the day after the game until dinner.

Sunday morning I slept in (again, I know, but I really only mean until 7:45 a.m.), tucked my Starbucks gold card in a pocket (and by that I mean the sports bra padding hole) and ran a nice loop finishing at my local coffee shop. I was pleasantly surprised by the pace of this run, considering the 4 hours of working out I logged yesterday and a slow first mile today.

I taught one more Pilates class for the week. I got asked to sub this one later in the week, and if I couldn’t do it, it would probably have been cancelled. I hate that for our clients so I will basically agree to sub any class that I can.

So, a bit of a “down” week for running (LOLZ) but still plenty of everything. Mileage pops back up next week, then it’s a bit of a rest and recover phase going into the half marathon and then the week after.

Running is time to clear my head, and I have one less thing to worry about thanks to @roadid. I know if something were to happen to me, all my info is handy — great when you run solo and sans phone, which is my usual situation. Excited to be back with #teamRoadID for 2021 AND to share the love with y’all — use code TGRUNFIT to save 25% through Feb. 26! 💕 P.S. no surprise but @morgan_the_aussie also wears a @dogid and we highly recommend — especially if you’re looking for a jingle-free option! 🐶
Did a whole lot of inside running last week. (I watched the entire season of #tedlasso.) Grateful I was able to get all my runs and workouts in as planned without worrying about busting my a**. Plus, got to do some gear testing like wearing my NB RC Elites for an 8 mi tempo and my buns just because I wanted to feel fast. 🤷🏼‍♀️ That said, super excited for clear roads and warmer temps this week! 🙌🏻 #springiscoming #teampbt #teamroadid #pickyambadassador #carmelmarathon
Picky Bars appreciation post! I joined the Picky Club a while back — 2019? — because I love #pickyoats like a lot. And I love the bars, too. They’re designed for athletes and especially athletes on-the-go, with ingredients formulated to provide energy without stomach upset (IYKYK). Especially since I’ve been working from home over the past year, my run schedule varies and a Picky Bar is a great grab if I need a pre-run snack — or if I need something between a long line of zoom meetings. PS #pickyclub members get a discount, you can revise your order any time, and you get other cool stuff like samples of future releases. 💕 #pickybars #pickyambadassador #lifepoints #marathontraining
Shoutout to all the #pbtlou athletes out there working hard! My coach @mattebersole and I partnered to offer Louisville-based training with tailored plans and optional Tuesday night speed sessions (maybe not this week 🤔). If you’re planning on a spring half or full, or just want some structure, we’re still accepting registrations! Check the #linkinbio for more info. #teampbt #run502 #louisvillerunners #louisvillerunning #runlouisville
Lot of us are about to be snowed in, so make plans to stay safe and warm and sign up for a class with me this week! On-demand available for $10/month, too. ❄️ #seeyouonthemat #kineticenergyfit
Best seat in the house with my best girl ❄️
Loading Comments...
Comment
×
%d bloggers like this: