When you live in this part of the country, summer is for short racing because it’s generally too miserable for much else. This summer, I squeezed in three races in less than six weeks while building my marathon base for Monumental in November. Multiple times I thought, “Why on earth did I think this was this a good idea?” 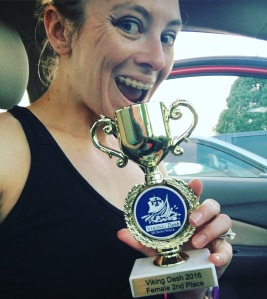 I came across this late-June weeknight race and thought it would be a fun alternative to Thursday’s normal speedwork session, but give me a way to mix things up. The race entry was inexpensive, it benefited a church’s programs and it was really conveniently located.

I taught Pilates Strength first — in my race kit — then headed to the race. Weather conditions at the start were about 98* with 18 mph winds and 28 mph gusts. For a hot, weeknight, Catholic church picnic race, there was a fast field. I took one look around and pretty much knew where I would finish. My race plan was to go by heart rate and race for place, not time. I ended up running the time I expected and finished in second as expected. My average heart rate was 180!

Part of me hoped my coach would bail me out and tell me not to run it. Instead, he said it would be tough, but the recovery would still be minimal, and that it would hopefully serve as a confidence-builder when racing in less-than-ideal conditions next time. 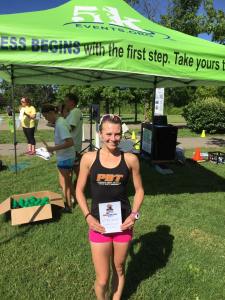 Apparently if you put on a race really close to me, I will feel compelled to run it. This one was right next to my gym (and when I initially decided to run it, I was still teaching there on Saturday mornings). I was excited that this race was on the same loop where I ususally do intervals, but I was less excited about the 9 a.m. start time — it’s July, let’s not give it extra time to get hot.

I wanted to run faster than the last race, but the course ended up being significantly short so it will forever be a mystery. Confident I did run faster, but not sure by how much. I picked up the female win — and fifth overall.

Exhibit C: “Hitting It Out of the Park: Grand Slam 4 Miler” 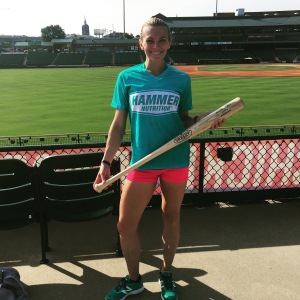 After two lackluster hot races, your confidence takes a little bit of a hit even when you know it’s not your fitness as much as the conditions. Of the three races, this was the one I was most excited about and most willing to suffer for — because the prize was awesome.

So winning was goal number one. Second goal was to break my 4 mile PR from the 2010 edition of this race, when I was coming off my then-marathon PR and was in pretty good shape (and about four months away from a full-blown injury). I believed I was in shape to PR, but had to consider the weather — 75*, dew point 72*, 90% humidity, sunny. Imagine running while wrapped in a warm, wet blanket. It’s like that.

I was also keeping in mind that this was my third race in 5.5 weeks, and we hadn’t backed off much for any of them. This one came towards the end of a 57 mile week, and I’ve averaged 55 mpw over the past 10 weeks with no off days.

My plan was to go out relaxed for the first 2 miles then try to press on the second 2. This was also largely dependent on the rest of the women’s field — I didn’t want anyone to get away from me that I thought I could beat.

This plan was somewhat inspired by a Lauren Fleshman quote I came across while reminiscing about her career after she announced her retirement from professional running this week.

Of course, I had 4 miles so that complicated things — but it worked.

I won the women’s division, set a new PR by 20 seconds, got a customized commemorative Louisville Slugger bat and got to throw out the first pitch at the Louisville Bats (our AAA team) game that night. How awesome is that?

This race features a pancake and bacon breakfast after, along with lots of door prize drawings.

The bat has the race name, date and “First Place” engraved on it. I think I’m going to use it to hang my marathon medals from — they’re about to outgrow the current rack, anyway.

So that night I got to wear my new Bats shirt that I picked up at the last game we attended — they rebranded this year. What a great night to get to wear my new shirt for the first time! My husband and I practiced throwing in the parking lot before we left to make sure I wouldn’t embarrass myself.

We got to stand on the field during warmups and the National Anthem, then the male winner and I both got to throw pitches to Buddy Bat (the best mascot ever), who then threw the balls back to us to keep.

No better way to wrap up summer racing and turn my focus to Monumental — summer running, had me a blast!