Oh, the grind. This week featured the first day this year that I really fell on my face in training. I mean, not literally.

Monday was fine, an easy 8 that included being drizzled on for much of it. Nothing particularly exciting, really. Just miles in the bank. Legs felt okay from Saturday’s race.
Spring — more like summer — arrived with a vengeance on Tuesday. I had 10 miles with 10-12 by 400 meters with 200 recoveries, efforts at 90% max HR. First, this is not the kind of workout I get excited about. This is just running circles around a track. Breaking it into 3 sets of 4 made it more mentally manageable … until it didn’t. My HR was elevated from the start of the run — legs felt fine but my heart rate was staying high. The sun was blazing, it was 80 degrees and there was a steady 15 mph wind. I thought about doing the repeats on the road where I could find some shade, but the 200 recovery makes that tricky. Sure, I can add .25 and .12 together for a couple of repeats, but I knew halfway through I’d forget where I was at. I also thought about running back to the gym and hopping on the treadmill.
Instead, I went to the track and failed miserably. I made it through 6 repeats, only two of which were close to target pace. I needed more recovery that allotted and things were just not going well. I did get in all the mileage, though.
Talking to coach after, he reminded me that we would always trade a Saturday PR for a Tuesday workout. A good reminder to not be discouraged.

Wednesday was a bit of a rare treat. I got to run with my husband, who schedule doesn’t normally align with mine. He was going to go shorter, but did all 6 with me. Just nice, easy recovery miles. I forgot my heart rate strap, but tried to keep it relaxed. Then he swam while I taught Pilates.

The temperatures cooled off after Tuesday, so Thursday so workout was fairly pleasant. In the 60s, but windy. I ran over to a good hill loop a few miles from the gym for 4x 60 seconds, 40 seconds and 20 seconds. I ended up running them like a ladder, which made it a little more interesting. It was a tight turnaround to get back to the gym on time for class, so I had to hustle! Thursday remains the toughest day of the week, with speed work and Pilates strength back-to-back. it’s a hybrid class that incorporates a lot of lunges and squats. Not exactly easy after hill repeats!
We had another beautiful day on Friday, and I was feeling in need of a mental reset, so I took to the trails for an easy fix. It’d been a long week at work. I accepted a job offer at a nonprofit, so I’ll be leaving my job of three years with the school district at the end of this month. So, this week included getting the offer, negotiating the offer, excepting the offer, and I’m rolling out the announcement and starting to make a transition plan. Plus, I really been feeling the marathon training mentally for the past week or so. It was good to get out in the woods.
And that brings us to Saturday. Up at 5:15, running by 6:10. They were calling for rain all morning, but scattered. Was not particularly warm, around 40° but with the windchill closer to 35. The agreement I made with myself was much like last week. Do the first hour outside, and if it’s terrible, move to the treadmill once the gym opens at 7. That cuts the treadmill portion down to a reasonable amount, and forces me to go outside – and once I’m there, I’ll probably tough it out.
The first hour was entirely in the dark. I stopped back by my car at about 7.5 and grabbed a Raspberry Hammer Gel and ran inside to hit the bathroom. It had been drizzling a little bit but nothing significant. I wasn’t going very fast, but I also wasn’t supposed to be – and it’s hard to run very fast anyway when it’s raining and dark and windy.
On that second lap, I was just trying to stretch it out as much as I could before looping back to the car. It was raining more, and if I was going to finish on the treadmill, I was hoping to minimize the amount of time I’d be on it. I was also working through mentally doing four sets of 5 miles. … Plus a 2 mile optional “bonus.” It rained quite a bit on this loop. My feet and hands were wet and cold.
When I stopped back by the car after the second lap, I was debating the merits of treadmill versus finishing outside. One concern I had was that Garmin’s my low battery alert had come on. The problem with an activity tracker that you wear 24/7, is that it doesn’t get a full charge as often. I didn’t want it to die around mile 18 or 19. But, it had also stopped raining.

Solution: plug watch into the charger in the car while putting on dry shoes and socks. This made for a longer break, but I also took my second Raspberry Hammer Gel. I grabbed dry gloves and my ear warmer — my hat was wet, my head was wet, my ears were cold. I had dry shoes and socks in case I ran inside — I didn’t want to do that in soggy shoes. Kind of defeats the purpose of switching to inside! My watch didn’t get much of a charge, but it was enough to last for the rest of the run. Unfortunately, it means my data is broken into two chunks. On the upside, that works, because Garmin Connect won’t let you divvy miles in one run between two shoes (you can apply the entire run to multiple pairs, but not specific milage amounts), so at least that’s logged correctly.

Out of a combination of laziness and familiarity, I set out to do the same loop for a third time. What can I say — it’s a good loop! Minimal traffic AND a water stop… What more can you ask for?
For something as long as 20-22, I start off very conservative. My average heart rate for the first 15.65 was 135 and my pace right around 8 minutes per mile. This is almost a minute slower than goal marathon pace — and that’s okay. Part of these really long runs is also time on your feet. And you’re trying to get in the mileage and the giants without being so tired or sore that you hinder the next few days of training. That said, last season I ran my two 20 milers pretty fast — but I was also running less mileage and skipping my speedwork. My long runs were serving a dual purpose — both endurance and speed — which was seemingly somewhat effective but probably not the best.
For the third loop, I knew I could start picking up the pace. I had spent my energy wisely thus far — I felt tired but not spent. I had been telling myself I was running 20, but I really wanted to get in 22 if things felt okay. So on the last lap I focused on running 2 miles at a time. You can do anything for 15 minutes, right? Finally, it was over. And I had an extra .25 at the end because I overshot it and it was too cold to walk.
I didn’t have time to shower, which was sad, but I changed into dry clothes and had chocolate Recoverite before teaching Pilates. And my class said it was too hard of a session — and I even did the entire thing with them!
I tried to stay pretty active Saturday, with a lot of walking, and wore my compression socks all day. Still, I was feeling stiff all day. And I ate like it was going out of style. I had tacos for lunch and a burger for dinner!

Sunday I was definitely stiff when I woke up, but I foam rolled and did some Pilates and Yoga to stretch out. I slept in and did some stuff around the house before I ran. Oh, and I made some AWESOME almond-butter stuffed French Toast (separate post with recipe coming soon).

I finally went for a run around 11 a.m. I was cranky about it because my legs didn’t feel great and the weather channel said it wasn’t nice out. It turns out the app was confused. It was beautiful. And once I started running, I felt great. Coach had scheduled 4-6 miles easy, and after 4 I felt great so I stopped by my house and grabbed my phone so I could stop for Starbucks and walk back. I also stretched it to 6.5 so I could round out my miles for the week. 😉 It was a glorious start to spring!
68 miles total — whew. Plus 3 hours of Pilates and 5.75 miles of walking. Four weeks to Carmel! 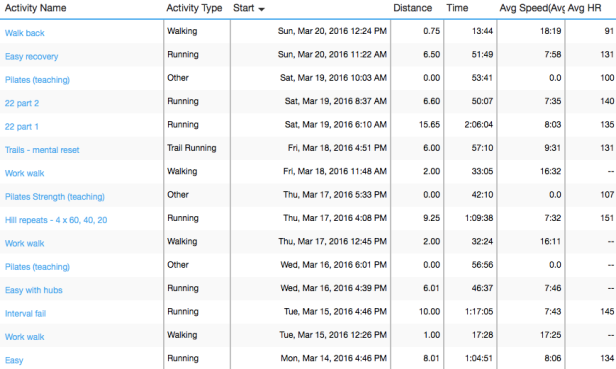