It has been such a crazy week that it’s Monday night and I’m just writing this recap. Yikes. So Saturday was 10 weeks out from Carmel — hard to believe it’s already that soon. I think those weeks are just going to fly by.

This really was an intense week. I co-taught my first two Pilates classes at Milestone on Wednesday and Thursday, then ran a long trail race on Saturday.

I started the week with an easy 6 on the treadmill, kicking off three straight days of FURLY runs. Timing for this run was tricky because I had an orthodontist appointment at 7:30 a.m. so I was trying to squeeze the run in before. Then they did a number on my mouth that’s not even worth explaining. We’ll just leave it at the fact I could barely chew for two days. Terrific. I went to the gym in the evening and did some Pilates on my own to prep for my classes, but skipped attending class because my mouth hurt. 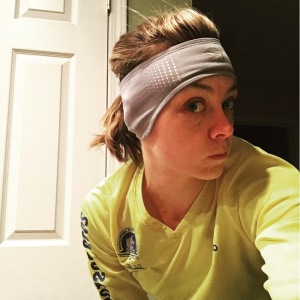 Tuesday was my first workout of the week and it was meh. First, running fast early is hard. Second, neglecting to eat anything before you run 10 miles hard is dumb. Don’t do it, kids. This workout called for 5k effort with with half-time recovery for a total of 25 minutes of effort. Tough morning. But any day you run double-digits before you go to work is a victory.

That afternoon I had a sports massage (also at Milestone), which is something I can’t stress enough. Regular massage is like an oil change. You may not really know you need it, but neglect it and you’re in trouble. In marathon season I like to go every three weeks. After that I went to Power Yoga for a great class that, as usual, made me sore.

Wednesday I basically ran in place with 24 mph wind gusts to keep me company. Super. Slow as molasses. Heart rate was where it needed to be though, so it’s all good.

That night I led my first Pilates class, teaching for the first 15-ish minutes. It was fun. I was nervous and I’m sure it showed, but I enjoyed it. When I switched spots with Alex, the instructor, I realized my feet were really sweaty. I’m a mess.

Thursday I hit the treadmill for a progression run but a pretty light one — coach didn’t was the effort to be too hard with Saturday’s race looming. I did 3 easy miles then a 4-mile progression of 7:34, 7:30, 7:22, 7:08, followed by a mile cool down. After that I taught 20 minutes of Pilates Strength, which is a really fun class. A couple of my friends came by to see me in action, including my friend Jaime who is also my usual yoga instructor. I felt more confident in that class and I hope that continues!

Friday was an easy recovery session, 43 degrees! Alas, our beautiful weekend is being followed by a cold front, some snow, and a bunch of other winter garbage. I got a bit of a later start because I picked up my packet for Saturday’s race (and chatted, and bought a water bottle and …) and had a meeting with Sue, the fitness director at Milestone. We are still hammering out my teaching schedule and I had to fill out all the official paperwork. Yay!

Louisville Lovin’ The Hills is a decade-only trail race that currently includes a 50k, 15 miler and 6 miler. I was signed up for the middle distance — a perfect long-run day. At packet pickup, I was pumped about the race swag — a great long-sleeve shirt with a hood and one of my favorite quotes on the back, and a custom-printed Buff UV Half-Buff. No complaints there.

Saturday morning I headed to the race around 7 a.m. — I love having my packet in advance. But, I was undecided about my outfit so I also wanted the extra time to figure that out. It was cold for the start but was supposed to warm up pretty quickly. But, then you throw in the wind and the shade from the trees … I ended up in capris, a long sleeve and a vest, plus my new Buff and gloves with mittens over them. I also had my new Nathan QuickShot Plus (80z, insulated version), which I carried on my run Friday as a test drive.

This run required a little more thought than usual — first, the weather conditions. Plus, this was a longer race that was also going to take longer — and I wasn’t sure how much longer because of the terrain. I anticipated being out for 2.5 hours, which required a decent amount of nutrition before and some during. I had half an almond butter sandwich on the way down and a Hammer Gel (vanilla) 15 minutes before.

The sun wasn’t quite up yet when I parked, but it dawn was coming and looking beautiful. Jefferson Memorial Forest is a true gem, just about 30 minutes from my house.

I waited a while for a (necessary) trip to the portajohn, then got in about .85 of a mile for a warmup. I was hoping for at least a mile, but it didn’t quite work out. I bumped in to some friends at the start but there wasn’t much pressure since coach’s directions were to keep the day at about my normal long run effort. I was there to have fun, enjoy the trails and get in a long run — not really to race.

The first loop went by quickly and I think it was the hardest. There were some big descents and big ups, but I felt comfortable and relaxed. After we went through the finish area, we ran a nice pine-needled stretch and popped out on top of the most beautiful lake. Just gorgeous. Then we had a section that included stone steps down a hill, then a little loop and then back up the stone steps. The steps are probably a half-mile stretch and are in sets of five or six steps with short trail sections between. I saw the lead two men as I finished the steps, then saw a ton of people as I came back up them. A friend told me I was in second place for the women.

Once I split onto the next section, though, it was several miles of not seeing anyone in front or behind me. I had a Hammer Gel (Montana Huckleberry) around mile 8, and despite holding it in my hand for a few minutes, it was mostly frozen. Yum. Miles 10-12 were tough. I had been out for a long time and there were no people anywhere. It was still great scenery and I was enjoying myself, but I was starting to lose my focus.

When we finally hit the lake again, I knew we were getting close. However, I wasn’t smart enough on the way out to pay attention to know how far it would be. But at mile 14.8, I saw another lady ahead of me. I cussed out loud. And by lady, I mean girl, because she looked like a high schooler even though she’s not that much younger than me. When I caught up to her, she had just started walking up an incline, which I was not opposed to. I had another guy right on my heels but quite frankly, I don’t worry much about the guys. He hadn’t passed me in all the miles he had been behind me, so if this was when he wanted to do it, fine. He didn’t. And the lady — Tavi — said, “We’re almost there, right?” Let’s file that under “things not to say to a competitor.” I was honestly not sure — it was supposed to be 15 miles but I had also heard it was more like 16. I told her it was definitely less than a mile … and then made the pass. #sorrynotsorry

I pushed ahead and it turned out it was only about four-tenths of a mile left to go. Good because I was toast. I recorded 2,400 feet of elevation gain over the course, 15.38 miles and a time of 2:25:47. (Garmin Connect log here.)

I was also not certain I was in first place, and wasn’t surprised when I finished and they said I was second. Another friend, Alicia, was signed up for the 50k but ended up just doing the 15. She had posted a great time out there last year and is a great trail runner, plus I think she had gone down to run the course recently. Still, it was a great trio of women coming in fairly close to each other for the 15. I ran 2 miles as a cool down, bringing my total for the day to about 18.4 (duly noted: always do a mile warmup so you don’t have to contend with the math after). Then I downed some Hammer Recoverite and hung out at the post-race party for a bit. I shared my mini TriggerPoint Therapy GRID roller and ate two homemade chocolate chip cookies and a bunch of other food. I love trail races.

Overall, if you’re looking for a longer trail race in the early months, this is a great option. Due to the evolving nature of Jefferson Memorial, the exact course tends to change from year to year but it is always a great event.

Originally, coach scheduled me for 4 recovery miles on Sunday. Saturday evening we decided to adjust the plan and go with an easy spin session instead. I felt like I had run a full marathon. All day Saturday my ankles and feet hurt, then by Sunday it was glutes and quads. I did an easy 35 on the spin bike and called it a day. (Plus a lot of foam rolling.)