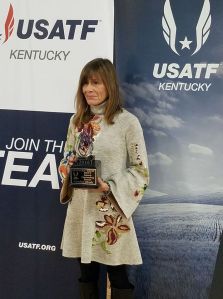 The USATF Kentucky chapter presented it’s annual runner of the year awards on January 7 in Lexington. I was excited to see my friend, sister-hero and inspiration Cynthia Heady win the women’s Mountain Ultra Distance Trail award!

Cynthia was the state’s 100 mile Mountain Ultra trail female champion after her 29:51:28 at the Cloudsplitter 100. She was second female overall and the top female USATF KY member.

“She had three other very good MUT/Ultra finishes as well,” said MUT chair George Leaf. “And she helps greatly in race organization, encouraging runners to come run the mountains here and elsewhere.”

One of the other races George mentioned was Cynthia’s performance at the Leadville 100 in August, where she finished in 29:23:04 for 46th female.

I previously wrote about Cynthia when she was chasing the Grand Slam of Ultra Running. Unfortunately, that year she was forced to drop out of the Leadville 100, ending her attempt at the Grand Slam. I was thrilled when she got even with the race this year!

At age 55, Cynthia also works as a nurse and owns Headfirst Performance, a race organizing and timing business, alongside her husband, Todd. They do a ton to make racing accessible for our local running community, especially for trail running, triathlons and races in the outlying suburbs.

Cynthia said she was surprised to receive the award.

“I was humbled and in awe of all the great runners that were there,” she said. “It meant a lot to get this award because I have spent so much time over the years racing, putting on races, and running.”

Not only is Cynthia a completely badass runner herself, but she is truly immersed in the community and is always the first to give you a hug and congratulate on your latest race.

“Running has been my life,” she said. “I really love it and as I age I realize that I love to share what I have learned.  I want to give back to the sport.”

For 2017, Cynthia plans to run Land Between the Lakes 50 Miler for the tenth consecutive year in March. She was second female overall there last year.

“I have really never trained for it, but this year I am since it’s my tenth,” she said.

Also on her schedule is the Yamacraw 50k in April, and then the Derby Marathon April 29 and the Backside Trail Marathon April 30, both in Louisville.

“I have ran each of those marathons back-to-back since they started Backside,” she said. “It is good training!”

After that, Cynthia was lucky to earn a spot in The UTMB, a mountain race in France in late August. The 105-mile course contains 10,000 feet of elevation gain around Mont Blanc, the highest peak in the Alps.

Cynthia was joined on the men’s side by Troy Shellhammer winning the men’s MUT runner of the year award. Troy (who incidentally went to high school with my husband) kicked off 2016 with three consecutive wins at The Pistol Ultra 100k in January, Louisville Lovin’ the Hills 50k in February, and Land Between the Lakes 50 miler in March. He was eighth male at Umstead 100 miler in April and 34th male at the Grindstone 100 miler in October. He’s also a running coach.

Other Runners of the Year Awards

Of course, there were plenty of other honorees, but I am so excited for Cynthia that I wanted to start there. I’m also excited that as of earlier this month, I’m also a USATF KY member and I’m ready to not only race but also find ways to grow the organization and support our running community.