We’re now 12 weeks out from the Monumental Marathon, which is normally when I start training. Except I’m starting this cycle with a 70 mile week and my second 20 miler. When I PR’d at Carmel, I peaked at 68! I don’t think I’ve seen 70+ since Marshall in 2009 — my long-time PR set the next spring was 57 miles per week average, max of 67.

But, we’ve gotten here slowly, building up gradually after Carmel in mid-April. 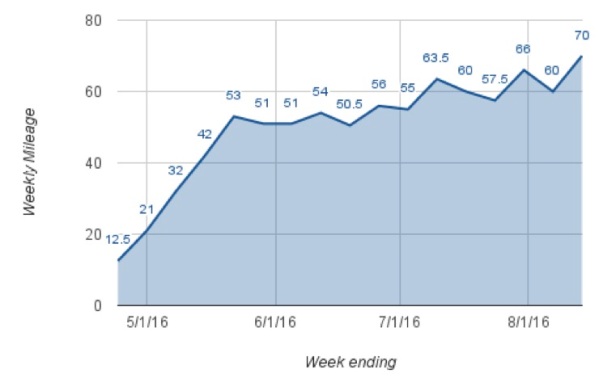 One thing you may notice is that we usually follow a one-up, one-down schedule — more noticeable when the alternating long runs get really long. The mileage variation is mostly due to those alternating long runs, because we go big miles one week then shorter with speed work the next week. It feels hard, yes, but not has hard as I expected. This week didn’t feel any more challenging than, say, 55 miles a few weeks ago. That must be what “fitness” feels like! It’s also definitely a testament to having a coach who is tailoring your training plan for you as you go, instead of following a set schedule out of a book that isn’t aware of how your body is adapting.

Of course, this also means I am going to see some mileage figures I haven’t seen in a long time — and that when I saw them last, resulted in injuries that left me largely out of competitive running for two years. So I am staying focused on injury prevention, in particular through consistent strength training, regular massage, frequent self-massage, adequate recovery (both post-workout nutrition and rest), and timely shoe replacement.

Okay, so this week, in recap…

My first Monday with the option for 10 miles. This is only an option right now every-other week, coinciding with the longer long-run weeks. Early and easy. First part on my regular loop and no creeper sighting.

I also rowed that evening, just 1k, and taught Pilates. That was my last night as the regular Monday instructor — I’m now just teaching Wednesdays and Thursdays. It’s a nice change because now I have the option to run Monday evenings instead of the morning, which is also nice because we normally have a team meeting at 8 a.m. on Mondays. (Our office opens at 9, so I lose an hour.)

Tuesday was hill circuits, early in the morning because of the weather and because I had a massage scheduled for that evening. Coach’s group in Indy uses a 2k loop with two 400m hills for this workout, so I used a loop that’s a smidge longer than 1k and ran it twice for each effort. I’ve been having issues with my HRM, so this was largely a “go by feel” workout but I was pretty happy with the consistency of the results. Second 10 miler of the week!

My usual Wednesday run date had to cancel, so I slept in a little and headed out to my normal loop. Creepy Mike was out so I ended up going a different way. Of course it was the first day back for our local public schools, so traffic was a mess and high school kids cat-calling me and whatnot. I overshot the loop and should’ve just run to 9, but I was running late. And then when I got back to my condo after all that drama, I spotted a screw in my tire.

Wednesday was the last day I was at a three-day workshop, where I had to sit in a regular chair from 8:30-5 basically. I have sat on a kneeling chair for about the past decade, and the 90-degree hip and knee angle of a regular chair apparently wrecks havoc on my hip flexor and subsequently IT Band. My massage therapist had a fun time with that on Tuesday. On the upside, we got out early Wednesday so I had time to get my tired checked before teaching Pilates. (Good news, it was totally fine. The screw was stuck in the rubber part but didn’t puncture, so they just popped it out and sent me on my way.)

On Thursday, I decided I couldn’t “dew” the weather any more. We’ve had dew points in the mid-70s and temperatures in the upper 70s every morning for the past few weeks, plus 85-90% humidity. I needed a break. So I hit the gym treadmill that morning, watching an episode of Orphan Black then switching to music. It was 10 miles (third of the week) with 5 miles of light progression, with the last mile no faster than 85% max HR. Plus I was able to leave all my junk in my locker for the day and get breakfast at the cafe. Win!

I taught Pilates Strength that evening then did a quick 1k row for a competition at the gym.

Friday was just 6 miles which seemed SO SHORT. Since I was trying to avoid another creeper feature, I went a different way and got in the extra .3 I needed to make up for Wednesday.

Then it was back to 20 miles on Saturday. The forecast was looking miserable Friday night but it ended up not feeling as bad as I expected and I actually had a really solid run. Even from the first mile I knew it was going to be a good day unless it got sunny and I crashed out. I ran 7 miles over to Cherokee Park to meet my friend Laine, ran 6 with her, then dropped her off and ran back. I probably stopped more often than would’ve been ideal, but I had the pickup/drop off plus plenty of water stops and then I ran into someone I hadn’t seen in forever at the park. Coach had suggested I take extra shoes and socks for when I got really sweaty, but my feet aren’t usually an issue (although I’ve done that when it’s been raining). Plus I forgot. I did this run as another glycogen-depletion experiment — no gels. I took one Hammer Gel before and then nothing but water and Endurolytes (2 before and 6 during, spread out throughout the run) during. And very very cold Recoverite as soon as I finished!

I was solo again Sunday but put together a loop I liked for an easy 5 to finish the week. 70!!!!

After Sunday’s run, I met up with a friend who is an officer with our local police department. I explained my creeper situation and the department is going run some patrols through there during my normal running time. It’s a great police department and I’m grateful they’re willing to listen — and work towards a solution that’s not “just don’t run that way.”

Little bit of a drop-down week ahead, with some racing coming up!