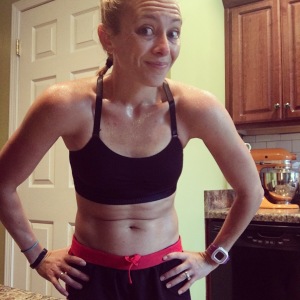 I wrapped up July with a big, awesome week — just 2 miles shy of my peak from the spring season … 12 weeks out from Monumental.

Monday: the weather was basically miserable. At 6 AM it was 79° felt like 85, with the dewpoint at 75. It was like suffocating under a warm wet blanket. But, my legs felt pretty good. Other than the race on Saturday, probably the best they had felt in five days or so. So that’s a positive! It did rain for 1 mile, which was excellent, but then it was just hot again. Then to the gym after work to teach Pilates.

Tuesday: nothing like a 10 mile Tuesday speed session at 6 AM. At first, when I walked outside, I thought, “hey, this isn’t too bad!” It was, technically cooler than yesterday and the few days before that. That does not mean it was actually pleasant. I changed my tune within the 1st mile. Hot and humid.

When I first looked — and then looked again, and then I get a couple more times — at this workout, I thought Coach was playing a trick on me. It called for 3 miles of steady-state with some 15 second surges. I’ve done 6 miles of steady-state in the past couple of weeks. So I only have to do half as much this week? I didn’t seem like the way things were trending. The searches were 15 seconds faster than 5K pace every two minutes. That’s the part that is apparently harder than it sounds. After a 4 mile warm-up, I eased down to about 85% max heart rate and then added the surges every two minutes. It is hard to recover from the search without dropping the pace and heart rate too far down. I suppose that’s the point. It was a nice workout with elements of racing tactic mixed in. I can definitely see how this would simulate the last 3 miles or so of a competitive half marathon, especially since it was about that pace. 3 mile cooldown that seems like it took forever, but then the hardest part of my day was done before 7:30.

Wednesday: Normally I meet a friend on Wednesdays but she couldn’t go, so I slept in and went from home. Not bad for a Wednesday. I noticed a little kink at the top of my hamstring but it didn’t seem to be aggravated by running — just by other things, so guessing it’s more a Pilates issue. I definitely noticed it teaching that evening and focused on gently stretching it. Plus more foam rolling.

Thursday: Not an ideal day. I had my second speed session of the week scheduled, but we had a threat of thunderstorms throughout the day. In order to get done and make it to work on time, I needed to be running by 6 a.m. When my alarm went off, I checked the weather and it said, “Thunderstorms expected 6 a.m.,” with a  high for the day around 84*, so I went back to sleep. I don’t think it stormed, and I’m not even sure it was raining. I got more sleep, though, so that’s a win.

But … that meant running after teaching Pilates Strength. I’ve only done that once before — when I raced in June — and it turned out okay. I was trying to avoid running this workout on the treadmill because it was all shorter intervals at faster-than-5k pace so it’s hard to manipulate the treadmill up and down that quickly. My hope was that it would stop raining and stay cool. Mixed results. We had a good class and I was definitely warmed up and loosened up when I headed out to run — at 6:30 p.m., meaning I’d be out until 8 p.m. which I was not excited about. It stopped raining, but the heat index was closer to 90 and it was still pretty steamy. I had a long warm up — 5 miles —then 4×40 seconds, 4×30 seconds and 8×20 seconds. It went by fast! Then another 1.5 cool down, and sure enough, 8 p.m.

Friday: I paid for Thursday evening’s foolishness. Squats, lunges and aerobic interval mix combined for a pretty clunky opening few miles. I stopped and stretched after 2 miles but it wasn’t until mile 4 that the pace got back to a more normal place. I was also not pushing it at all — I knew I had a big day ahead on Saturday, so nothing to prove with Friday’s run.

Saturday: Long run day! More rain! First, I did not sleep well. When my alarm finally started sounding, it was back to checking the weather as a determining factor. For a while, they were calling for thunderstorms starting around 9 a.m. When that scooted back to 3 p.m. and the temps were supposed to stay in the low 70s until mid-morning, I slept some more.

I can’t wait for it to cool down so I can sleep in more.

I had 18 miles on deck, and coach wants me to get in some long runs without taking in nutrition to get my body to switch to fat conversion. This is not something I’ve done much of and I took a gel with me in case of serious bonk. I took one Hammer Gel (apple cinnamon, just like the inside of a pie) and 2 Endurolyte tabs before I started out. This was supposed to be a low HR day so I was just out for a nice long jog by myself. Low 70s, breezy and cloudy — about the best I could ask for in late July.

I have a nice loop close to the gym that I did first, then stopped for water at 7.5 (probably could have used an earlier stop). Then I tacked on a long neighborhood loop over to Seneca Park, then over to the Reservoir for a couple of laps.

After I left the Reservoir for the “Dead Doctor” loop (don’t ask), I saw a hawk — right up close on the fence next to me. I saw another hawk about a mile later, but it’s possible it was the same hawk, and I was in no shape to figure that shit out.

Note: if you’re going to do a glycogen-depletion run, plan the route in advance before your brain gets too addled.

I was drinking a lot of water and my stomach didn’t feel good for most of the run. I stopped for a bathroom break around 15, but that didn’t help. I don’t know if I over-drank or if it was just upset in general. But what I eventually figured out was that I had way overshot the return trip, and I was at 18 miles quite a ways from my car. Like, walking would take a long time. On the upside, I had made it through the specified distance, so I didn’t feel bad about a second bathroom stop. After this stop, my stomach was feeling much better! And I was in a/c for a few blissful minutes. (This paragraph would be TMI except it’s a running blog, which means we’ve all been there.)

“What the hell,” I thought. “My legs feel okay, my stomach feels okay, might as well run some more.”

Running takes about half as long as walking, so I figured I’d run to 19 and then walk.

But then that mile was the fastest of the day. Amazing what a bathroom break can do for you. And I was back on my normal loop, so I could do the math and knew I had more than a mile back to my car.

“Well, hell,” I thought. (Possibly said aloud, because I was at mile 19 and typically that’s when I just start muttering curse words.)

And then that was the fastest mile of the day, and then I quit running. I still had about a quarter mile to walk, and then what seemed like another quarter to pop in the gym and get ICE COLD water for my Recoverite.

When I got home I literally laid on the floor. At some point I drank another two scoops of Recoverite because I knew it was going to be a while before we got lunch and, having just scorched through 2000 calories with none coming in, I knew I needed it. I thought about having a regular snack, but Recoverite has that optimal carb/protein ratio along with electrolytes and glutamine.

If you’re wondering, no, I didn’t do anything productive the rest of the day. We had lunch with my sister-in-law for her birthday, saw the new Jason Bourne movie, ate some frozen yogurt, played arcade games at RecBar then played the longest game of Trivial Pursuit ever at 3rd Turn Brewing. We picked up dinner — first time I’ve had the sofritos at Chipotle and I’m obsessed — and I basically fell asleep right after that.

Sunday: I had made plans to run with my friend, and gratefully later than usual. 8 a.m. basically feels like 2 p.m. I slept in as late as possible (fail) and still had time to figure out a meal plan for the week and make my grocery list. Sunday’s run schedule was just 4-6, and since I did some bonus miles Saturday I figured 4 would be plenty. Minus the lurching first 50 meters, it was actually a solid run and faster than I expected. I definitely could’ve gone 6, but I was keeping in mind that I’ve still got 8 on Monday and 10 on Tuesday. When your schedule doesn’t actually include off days, it’s wise to gratefully accept the easy days.

I executed the grocery list post-run, still getting there early enough that it was totally empty, and I’ve been holed up at Panera Bread since then working on this post. 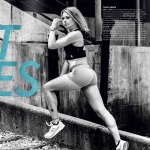