Happy Valentine’s Day! As I write this, my husband is making me chicken piccata and homemade tiramisu … even though it seems this week it seems like my significant other is the treadmill.

Monday we had crazy weather — snow, sun, snow, rain, sleet, snow. Treadmill for sure. This was just an easy recovery day, 6 miles. After Saturday’s race, this was a bit of a test run to gauge how the legs were recovering and give coach feedback before Tuesday’s speed session. My cross-training was a little different than normal that evening because I did a demo/presentation on Pilates to a group in Milestone’s Learn to Exercise program. This six-week program includes a membership to Milestone for the program duration and 75-minute weekly class sessions with 45 minutes of activity. The program is designed for people who want to exercise but don’t know where to begin or who are intimidated by fitness centers. It’s a great program and I really enjoyed talking about the philosophy and principles of Pilates and taking them through a routine. I wish all of them the best in their journeys to heath and wellness, and I know that they will find a welcoming environment at Milestone!

Coach decided to swap Tuesday’s and Thursday’s speed sessions, but then we ended up modifying it again. He had a set of shorter intervals (40 seconds, 30 seconds, 20 seconds) that he moved to Tuesday, but I was trapped on the treadmill as it continued to snow, sleet and generally be a slick icy mess. The intervals were supposed to be at 800-meter to mile pace, which means faster than 6 minute pace. It’s tough to get a treadmill up to that kind of speed and back down in short bursts like that, even if you’re doing that jump on/jump off thing that I think is completely dangerous. Instead, we went with a light progression run — 2 mile warm up easy, then 4 miles cutting back each mile from 7:30 to 7:08, then a mile cooldown. It felt pretty easy, which I think was the point. I followed that up with Power Yoga and I’m looking forward to sharing an article I just finished for Louisville Women’s Sports about the instructor, who is still kicking my butt with a due date of Feb. 22.

Wednesday was an easy 6 mile recovery on the treadmill followed by Pilates. As of next week I’m teaching that class! Yikes!
Thursday morning I started my day with a short 19-minute Pilates session at my office for some of my coworkers. I offered to do a morning session and an afternoon session as a way to encourage them to adopt healthy lifestyles. It’s exciting to get people involved.
That afternoon was the big speed session of the week which I initially thought sounded fun. When I was dry-heaving 8 miles in, I rescinded that assessment. I had 2 miles easy to warm up, then 3 miles at goal marathon pace, 2 miles at half marathon pace and 1 mile at 10k+ pace (90% HR or higher, hence the heaving). Then a 2 mile cool down, which felt like it took forever.

Friday I had a rare “runch” opportunity — that is, a run at lunch. One of my coworkers brought in a treadmill and put it in her office, so I thought I’d do that (I had also started a movie on the ‘mill on Thursday but hadn’t finished it). It was not an ideal situation. It’s a compact, folding treadmill so it’s really narrow and at a permanent 2% incline. Plus it was hot in there! Fortunately I had packed clothes for outside, so I abandoned the inside ship after 2 miles and ran past some baby goats. Check out the crazy HR action — treadmill: 2 mi, 8:30 pace, 161 average HR. Outside: 3 mi, 8:01 pace, 145 HR. Although 145 was probably still a little high but I was trying to finish up.

After work we had another in-office Pilates session with a great turnout. I was so impressed!
I was excited for Saturday’s run — coach has been giving me drop-down long runs, so we go really long one week then drop it back and add speed in the next week. It’s a little more mentally doable than having 16+ multiple weeks in a row but I suspect I won’t get off this easy for long. We’re still testing the waters and see how my body responds … and the longer everything is going well, the harder it’s going to get!
The less-exciting part was the 8* forecast for Saturday morning. Back to the treadmill, my constant companion. Having done 10 on the treadmill Thursday — and 16 a few weeks ago — 12 really didn’t sound that bad. I queued some stuff in Hulu and headed to the gym pretty early — I was bringing my sister as my guest to 10 a.m. Pilates so I needed to be done in advance.

Saturday’s workout was 4 miles easy, 2 miles of 1 minute hard/1 minute easy, 2 miles easy, 2 miles half-marathon pace, 2 miles easy. Until the cool down it flew by (of course)! The minute on/off segment was fun — probably would’ve been more fun and faster outside but it was still interesting. The 2 miles at HMP actually went better than they did on Thursday. Overall I was really happy with that run. My hamstring was a little tender after but I’ve done a lot of foam rolling and it seemed fine Sunday. I also wore my New Balance Vazee Pace shoes for this run — I’ve been wearing them for speed sessions but I think 10 is the farthest I’ve gone in them. They’re a contender for my marathon-day shoes but I’m not completely sold on them yet. This was a good session in them with no ill effects, though, so I may take them out for next weekend’s 18 miler.

My sister and I went to a packed Pilates class after that — it was the intro class but there were a few more advanced folks in there so the instructor gave plenty of options. It was actually Alex’s last day and I’m so sad to see her go! She’s been great. I’m taking over four of her classes at Milestone which makes me pretty nervous because she has such a great following. Fortunately, I know a lot of the regular attendees so I think they’ll be patient as I get into a groove. (That reminds me I need to get my class plans together! Yikes again!)
Pilates is fascinating because you can go to an hour class and have moments where you feel like it’s really hard for 2 or 3 reps, but you leave the class thinking, “Oh, that wasn’t much of a workout.” Then you have to send your sister a text the next day that says, “My abs are sore!” Ha! Pilates bodies rule.
After that I was stoked to host an Olympic Trials Marathon watch party at one of my favorite places, Saint’s Pizza & Pub. This was the first year they’ve shown the marathon trials live on television and we had a great turnout. I’ll post a follow-up to my Kentucky qualified series soon with updates on how three runners with local ties fared.

I got to run with my friend Amanda Sunday — she’s running the half at Shamrock in about a month. It was her long run day so I jumped in for 6.5. We got snowed on the whole time. Windchill was about 10* but it wasn’t blowing much so it was okay. It was nice to finally be outside again!

In total, 53.6 miles for the week (not bad considering how short the long run was!), plus about 4 hours of cross-training. Nine weeks to Carmel Marathon! 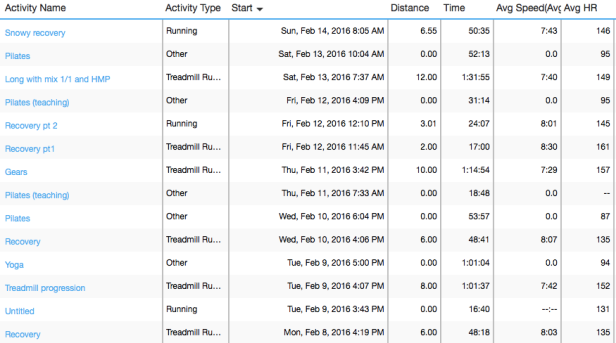 One of my favorite discoveries during the pandemic was @bloomedroots — thank you Bailey for being an inspiring female entrepreneur and always brightening up my day and my space with your floral designs! 💕
It's time for @roadid's #springsale! From April 13-15, save on EVERYTHING. If you've been saying to yourself, "wow, I should really get one of those" — here's your chance. And because I know a lot of y'all have one already, it's also a great time to update your info or just refresh your style with a different faceplate or band color! OR get one for your #pandemicpet. Having a #roadid is peace of mind for you and your loved ones. 💕 And as if the sale wasn't incentive enough, I also have a free shipping code for you. 😍 Use SHIPSFREE_X67VETJY (I know, that's a lot — DM me and I'll send it so you can copy-paste!). #teamroadid
Celebrate #PilatesDay with me! On Saturday, May 1, I'll be hosting a special pop-up class at 9 a.m. — virtually and with a very limited number of in-person spots in my backyard (weather permitting). Sign up now at kineticenergy.fit!
Was feeling crummy after vaccine 2 yesterday so @morgan_the_aussie and I spent the afternoon lounging in the yard, enjoying a breezy 80° day. 🌳
Made some adjustments based on your feedback!
Opt outside 🌳
Loading Comments...
Comment
×
<span>%d</span> bloggers like this: