While I love the cooler temperatures that come with fall, I’m not a fan of the shorter amounts of daylight. It’s not even the change from DST — I don’t really care which end my daylight is on, I just need more of it!

While training for the Monumental Marathon (Nov. 7), my peak training weeks coincided with a strong absence of sunlight. At least a dozen of my runs have started before 6:30 a.m., and sunrise was around 8 a.m. in the last couple of weeks before the time change. It is a strange experience to get in 12 miles and not see the sun until you’re out of the shower.

For the most part, I don’t mind running early. It’s quiet and peaceful and cooler. But running in the dark obscures potential obstacles like potholes and sidewalk cracks. The last thing I want in the midst of marathon training is a sprained ankle. I also have a healthy paranoia of being hit by a car, so over the years I’ve used a variety of flashlights, blinky lights and other safety gear.

This year I invested in a few that have quickly become all-time favorites: the Nathan LightSpur and Black Diamond’s Spot headlamp. A disclaimer that I did research and shopped around and chose these on my own — no promotional freebies or other sponsored advertising here. Just a girl trying not to get hit by a car.I am a big fan of blinking lights because they’re an easy, active way to make sure people see you. Unfortunately, I have always struggled to find places to clip them on — they’re either hidden by my shirt, or they rub on my hip, or they’re too heavy — and inevitably for one or more of these reasons, they fall off and break on the pavement. 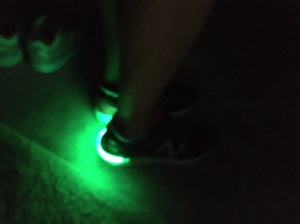 Enter Nathan’s LightSpur. It is really like a cowboy spur — it hooks around the back of your shoe. It’s not noticeable while you’re running and I’ve yet to knock it off. It’s available in green lights or red, both 5-lumen LEDs powered by replaceable watch batteries that should last 40 hours. It’s visible for 2,400 feet. I like that.

Initially I was sold on this light by a colleague at Ken Combs Running Store, where I used to work. I asked his opinion and he said, “Several people in my group have the LightSpur and it’s really obnoxious.”

When it comes to safety, obnoxious is good. On an early morning run, a friend remarked she couldn’t run behind me for fear of having a seizure. Seizure bad, but obnoxious good.

The LightSpur has both blinking and steady options, so I go with flashing when running solo but solid when running with others. It retails for around $20 and should be pretty easy to find. Nathan has a retailer locator on their website, and if that doesn’t work, Amazon has it too.

Around the same time, I resumed my quest for the perfect see-where-you’re-going option. I ran the Bourbon Chase four years along with Red Eye Relay in Bloomington, so I’ve used a variety of headlamps and flashlights. I had avoided buying a headlamp because I was never comfortable with one, but that’s likely due to wearing ones shared by people with bigger heads and trying to adjust already-sweaty headlamps for a tiny head. (I wear kid-sized hats and often kid-sized glasses.) So I was willing to give them a chance but, since good headlamps are expensive, I wanted to feel confident in my choice. I did a lot of online research and eventually ended up at Quest Outdoors, a local retailer in Louisville. 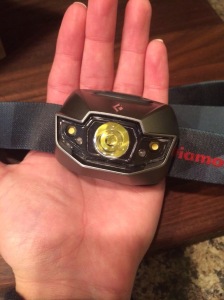 A salesperson at Quest helped me select the Black Diamond “Spot” model, which gives you 130 lumens for just $40. It’s the company’s most popular headlamp and provides lots of features in an affordable and lightweight package. It weighs 3.2 oz with batteries (3 AAA) and can illuminate up to 75 meters away on full power.

You can use the PowerTap feature to instantly dim the light while in distance or proximity modes, and other modes include strobe and a red light night vision. It’s designed for both active use and camping, which is why you have proximity and red night vision options. It also has a lock feature so you don’t accidentally turn it on in your bag. The light also hinges so you can adjust the angle at which it is directed. I usually tip mine down one click, but sometimes two when I’m on a stretch of not-flat sidewalk and I need to see closer to my feet. 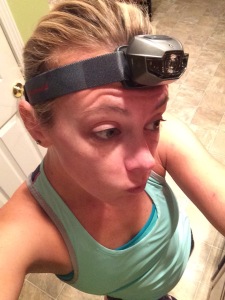 Spot and I have already logged enough miles together — at least 40 in the first four weeks — that I can say it was a good buy. I don’t know that it would be powerful enough for a run with obstacles and little ambient light — like overnight ultra in the woods — but if you’re running in neighborhoods without streetlights, it works great. Also, there is a battery indicator on the side when you turn it on … check it! I ran this morning not realizing the batteries were almost dead until I got to an area with no streetlights and noticed how dim my light was.

I also considered Nathan’s Zephyr Fire Torch, a flashlight with a hand loop similar to a handheld water bottle. It comes in two options, 100 lumens and 300 lumens, and is angled down slightly unlike a traditional flashlight. It also has a red safety light on the butt of the flashlight. It weighs in a little over 4 oz and costs about $60, which didn’t seem like the best combo for me. But, if you’re against a headlamp, this could be a good option.

Now, here’s my strongly-held opinion about reflective vests. A reflective vest only works if someone’s headlights hit you. That leaves openings for headlights that are off or out, corners, etc. I fully support wearing one in addition to other light options, but not as the only piece of safety gear. Also, I have yet to find one that fits me and is in any way comfortable. Once, during Bourbon Chase, I had to tie the straps together while running 6:30 pace because it wouldn’t stay on my shoulders.

Of course, there are lots of apparel options with safety features, but don’t let “reflective trim” be your only warning system. But, if you’re looking for new vests, jackets or tops (and even some pants), most of the brands have options. I’m eyeing New Balance’s Beacon Pullover, which is made with an allover glow-in-the-dark fabric.

As we trudge through the dwindling minutes of sunlight until winter solstice, invest wisely in quality gear and you can run safely all season! Have a favorite product? Share below!