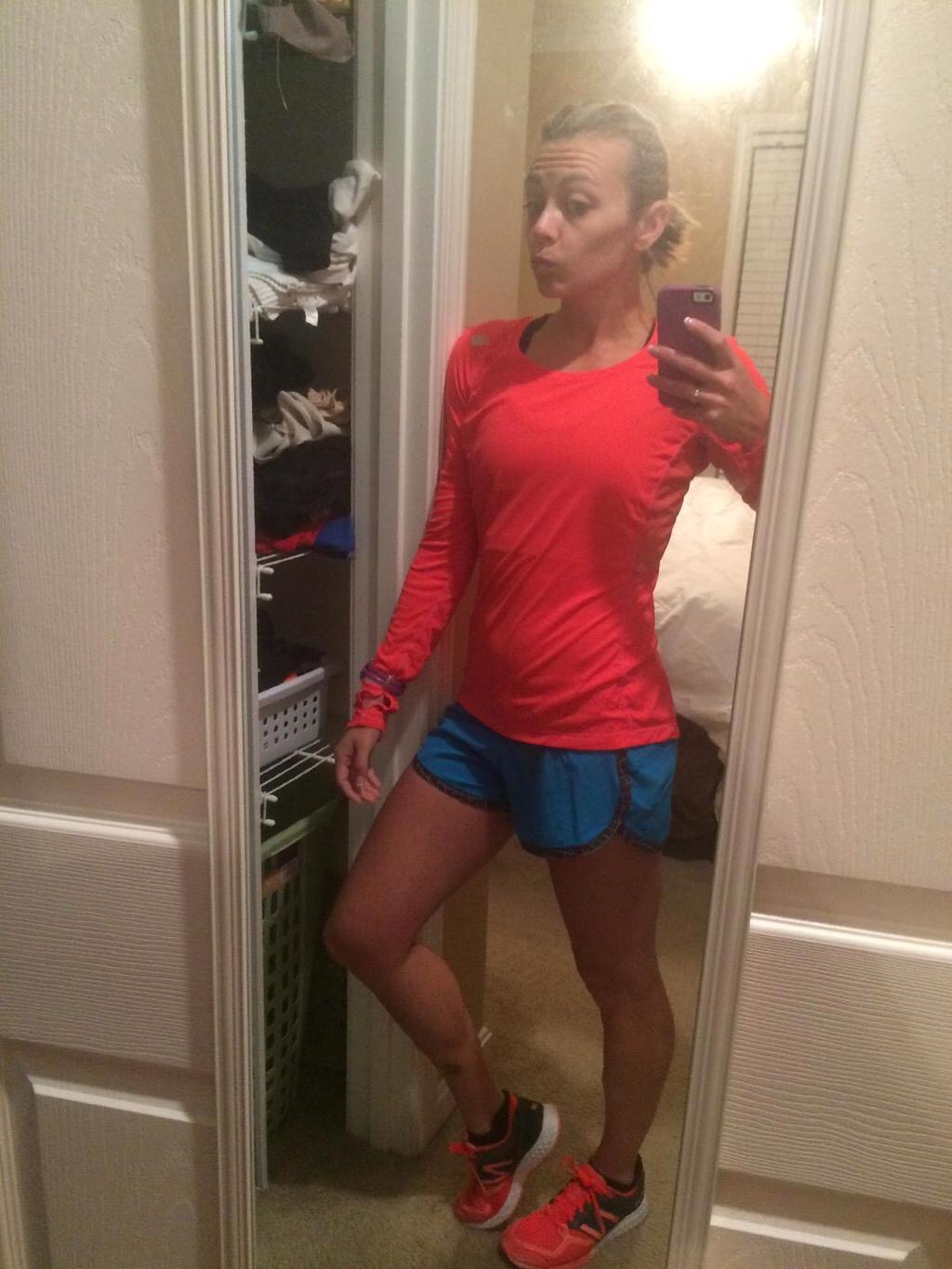 About halfway through this week I feared it would be a disaster. The race + long run combo did not help the sore hamstring/IT band I had going last week, but I hoped having Monday as an off day would help (although I did go to Pilates). And my orthodontist added rubber bands to my ensemble that morning, so my mouth hurt for the first part of the week.

I had to be in the office early several days this week so I was able to get out early as well. Tuesday I put in 7 miles and it stunk the whole time. I did manage to drag myself through 6×100, and then went to yoga. It was a tough yoga day… My toes kept cramping and I just felt tired and stiff and flat.

Wednesday was supposed to be 10 miles with 4×1200. It was not. It was zero miles. I still felt worn down. I haven’t been sleeping enough, and what sleep I’m getting hasn’t been great. I could feel the cumulative fatigue setting in. Marathon training was winning. I ended up taking a half-day off on Wednesday and coming home and going to sleep. (At least for a little while, then I had two situations I had to deal with.) I thought about going to Pilates but decided a) it was too beautiful to be inside and b) maybe all that hip work and bridges were not what I needed. I went for a 3 mile walk instead … it started off shorter, but then I decided to get Epsom salts from the store and a chai latte from Starbucks. I came home and soaked in the Epsom salts and drank the latte and read my book and it was tremendous.

Thursday was an early day because I had a massage scheduled for 4:30 … rough life. The 10 mile run was a struggle but I stuck with it. The massage, however, was great. At the beginning of this training cycle I went ahead and scheduled three sessions — this was the last one. I’m going to book another for race week and one soon after. But because of the massage I missed going to Pilates strength, a class I really like.

Friday was a happy day. My friend Laine ran with me, and we did a super-easy 6 on the trails. Once I dropped her off I went back to roads. The weather was gorgeous. That night, hubs and I went to a new restaurant in town and had tapas and I had a drink called “Running with the Buffaloes,” which reminded me of the Chris Lear book and earned a Twitter favorite from Jenny Simpson.

I had a short recovery run Saturday — a great thing since I had switched the off day from Thursday to Wednesday and thus had run 21 miles in 36 hours. I didn’t even worry about pace, and I was trying to test out the Zantes I’ve had laying around. Verdict? Not my shoe. At least not right now while my legs are beat up. I could probably race shorter distances in it but the Boracay will definitely be my marathon shoe.

I had to run early Saturday because I was heading to Frankfort to shoot my sister’s engagement photos. We used Switzer Covered Bridge as our backdrop — their choice. Cool bridge but covered in graffiti — not the vibe I wanted.

So, four runs in to the week and all of them had been lackluster. Great set up for Sunday’s 20 miler. And try as I might, I couldn’t land anyone to keep me company even for part. Since training for my first marathon in fall 2007, I don’t think I’ve ever run 20 by myself. I was intimidated.

Also, it was going to be cold. Literally freezing. So I slept in a little and then pulled my act together. I had a rough route idea and took a minute to map it out. I had some wardrobe dilemmas — always happens when the weather changes drastically. I left the house in capris, tank, long sleeve, ear warmer and gloves. But I had packed arm warmers, shorts and mittens. All options covered. I ended up changing to shorts since it was up to 35 degrees when I started. Gloves, no mittens (I have Reynaud’s so the switch to mittens happens early … and I wear gloves around 50-55 degrees and below). Thin long sleeve over the tank. Lots of pink! I packed two gels — root beer and plain — and got going.

My plan was to take the first half easy then pick it up over the second half. I was feeling good starting out and was right in the ballpark of my 7:45-8 min pace plan. I stopped for water at 6 miles in Browns Park. I had to decide if I wanted to take the first gel early, or wait until the next water stop. For the marathon I will probably do miles 7, 14 and 21. I had only been running for 45-ish minutes so I decided to wait. Nothing much interesting that I can recall from that first bit … I was in the zone and clicking off miles, feeling good. I didn’t plan a super-hilly course but the first couple came around mile 7.

I reached Seneca Park at 8.5 and got water. I had entertained myself for a bit by deciding which gel made sense to take first — one had caffeine and one didn’t. I went with the one without, thinking the extra boost would be better at the end. Caffeine doesn’t always sit well with my stomach so I was concerned about taking it second when my stomach would already be confused. Only one way to find out.

Miles 9-14 were the hardest on the route, inconveniently timed as I was planning to start picking it up around mile 9. I took a bit of a stretch-and-think break at the top of the hill coming out of Seneca Golf Course — the hill is hard and it was into the sun, which was finally doing its job of warming things up. I tied my shirt around my waist and put my ear warmer around my arm and off I went. I had a nice split coming up the hill so I figured it was time to start pressing on the gas. Mile 14 had another decent climb and was a little slow but nothing to worry about. I had been thinking about the run as four 5-mile chunks, and I was back in Seneca with 6 miles to go. I stopped for water again but knew I’d have another stop coming up soon where I could take my second gel. Hamstring was feeling cranky but I was still rolling along and generally feeling good. Somewhere in here I was discouraged that my average pace on my 20 miler two weeks ago was 7:37 and I didn’t think I would catch that — I was at a 7:43 average and running 7:37 when I had this thought.

I took my last gel in stride when my watch beeped 15. Always good to practice especially since they’re way harder to rip open with braces.

I talked to former mayor/lieutenant governor (now advisor to Obama) Jerry Abramson for a few seconds — he was home for the weekend but about to head back to D.C. One more water stop at the reservoir, where I tried to figure out if I needed to run a lap around the reservoir before I headed back. I decided no because I had mapped it out perfectly without it, and I was pretty sure I had run the route the way I planned. I split 7:12 for mile 16 — time to shine. After that I split 7:08, 6:52, 6:48 and 6:28.

I’ve been finishing my long runs with my watch switched over to running time + distance instead of my usual distance/pace combo. I like to focus on finishing strong and not worrying about the pace, while visualizing the finish. Suddenly my goal became to finish the run under 2:30, which was going to be hard.  I think I had 2:23 on the clock with 1.25 miles to go. Drop the hammer. Hammer + hamstring = yuck. I just kept pushing.

When the last beep sounded, I had no idea what my split was. But I did know that I had beat my newly-assigned goal by 14 seconds. I was wiped — probably more mentally than physically. But man, did it feel good. I went back and looked at my  splits while I was standing there and was tickled pink. I was bummed I didn’t have anyone to say, “Hey! Good job! Great run!” but I guess sometimes you just have to pat your own back. I saw three cats (gross), two bird feathers (lucky) and one Jerr-Bear (lucky?).

Since I was mentally running sets of 5, here’s what the splits looked liked over those sets:

Back at Milestone, I did a quick clothing change, drank Recoverite, and got a coffee. Right now there’s a gym fitness challenge called “Around the World.” For six weeks, you log your exercise with the goal being that the gym’s members log enough miles to make it around the globe. And you earn “miles” for cross-training, too.

They give out prizes at the end for the female and male with the most weight lost by percentage … but also a drawing between the top 10 with the most accumulated miles. Even though I had a few pounds to lose to hit race weight, the chances of me losing the most are basically zero. But I can log a whole lot of miles … especially in the midst of marathon training. Last year I was in the top 10 and I was just training for a half — and I won an iPad mini.

So I was logging my past few workouts when a guy came over to log his. He jokingly asked if I was trying to win. I seriously said yes. He said he thought there might be an iPad for the winner. I said not this year, but that it was okay, I won one last year. He said I shouldn’t be allowed to participate again. Then he looked at my total and stopped talking. I flipped to the second page of the log, wrote in a big, fat 2-0 and wished him luck.

Total: 52 miles, two cross-training sessions. It’s all downhill from here. Mileage for week 10 is 43-45, includes another race + long run combo. I’m having trouble finding a race … there are a few 5ks but even those aren’t nearby.