A solid week in the books. I do think the hardest part about the Pfitz schedule are the two tune-up races with long runs the next day. My legs were garbage after Sunday’s long run.

Monday was an off day so I went for a walk and to stretch & abs at Milestone.

Tuesday was supposed to be 8 miles with 5×600 but my legs declined my invitation. I went ahead and put in 7 miles because I knew I had a meeting late on Wednesday, had to get in an 11 miler and had a challenging weekend ahead. But my achilles/calves started off tight and about halfway through those loosened up but my hamstring went the opposite way. Afterwards, I went to Power Hour Yoga — not sure if it helped or hurt.

Wednesday was going to be the speedwork makeup day but my legs still weren’t having it. All sorts of things hurting. And, I got started late because of my meeting (I should’ve run in the morning but …) so I missed Pilates.

Thursday was originally the scheduled second off-day but I used it to squeeze in a really junky 11 miler. Nothing hurt, so that was an improvement, but I was not feeling optimistic about Saturday’s race.

Friday I took as a total rest day. Thought about cross training listed to the message my body was sending. Oh, and we were at the Kentucky Science Center late Thursday night for exBEERiment! Super fun. For $20 you got tickets to sample about 30 oz of beer from a bunch of local breweries while playing in the science center. 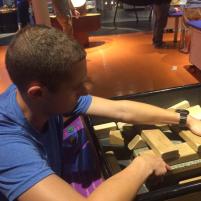 I was able to pick up my packet on Friday and even in a convenient location, so that was great. I got up and foam-rolled and ate my current pre-run favorite: a slice of Brownberry Health Nut bread with almond butter and honey. Due to construction and the fact they now charge at parking meters on Saturdays, finding a parking spot took a little more work.

After much internal debate, I decided to stick with my Boracays for the race. I have a pair of Zantes, but I haven’t put more than a couple miles on them and thought that might be a bad idea. And, my goal for the race was the same pace I ran in the Boracays during tempo last week.

Race temp was chilly, so I warmed up in a long sleeve and wore gloves the entire time.

I used the McMillan Calculator to set my goal for the race at 41:30 — 6:40 pace. My plan was to go out at that pace and try to pick it up over the last half. The crowd for the race was light — there were some 10,000 in the 5k but not many people opted for the hour earlier and twice as long option. I am friends with the guy who went on to win and we were planning to run around the same time. Another guy — who turned out to be 52 years old and was also wearing a polo shirt — made up our lead pack of three. Brian Crumbo pulled away early (especially after I went through the first mile too fast and eased off). It was pretty windy, but a flat course except for a hill at the turnaround (hence the plan to pick it up on the way back).

The best part of the race was that it used the same road that Ironman’s bike route would travel on Sunday, and many of the athletes were taking their bikes out for an easy ride. They were using one side of the road and cheering for the runners. Made for an electric atmosphere — you could almost feel their pent-up energy.

First half splits — 6:31, 6:42, 6:41. The uphill started right around the 5k marker, although nobody else knew that because there were no mile makers. Out of the top three finishers, I was the only one wearing a GPS, and I wasn’t paying much attention to it. I started to pick it up as we came down the hill, at which point I noticed the next group of runners had mucked up the route and were coming up the U the wrong side. I think it got sorted out after that. (No volunteers on the course, just one police officer blocking traffic.)

Afterward I froze to death volunteering at the New Balance table, then ran a very ugly half mile back to my car. Not the best cool down scenario. I had my Recoverite in the car but probably didn’t drink it as soon as I should’ve.

Then, I realized as I got in the car that I had time to make it to the Intro Pilates class at the gym! (This is something I was very excited about.) I thought the advanced class would be too intense but the intro one would be a good stretch session.

After class, the instructor (we’re friends on Facebook) said, “Didn’t you run a race this morning?” So I was busted. She agreed that the intro class was the better choice. An older gentleman — props to him for being there — remarked, “Surely you’re ready for the advanced class!” I apologized for crashing the intro class. I did feel like a show-off a couple of times.

I also hopped on the Tanita scale while I was at the gym. This is the new extra-fancy one and I love it. I’ve been getting on once a week or so to track my progress back to racing weight. Probably weighing in after running 9 miles and doing Pilates is cheating … but … I’m so close! If you’ve never had the chance to use one of these, it’s really neat. You hop on without your shoes and tell it your body type, height and age. It sends an electrical signal through your body to assess your metrics. In the image at right, you can learn probably more about me than you need to know — includes body fat percentage and BMI, but also total body water which can help assess hydration levels. There’s also body fat, which is a helpful number if you’re applying some of Matt Fitzgerald’s philosophies from his Racing Weight book.

One of the trainers told me hi and asked if the scale said I was still skinny. Ha!

Guys, I just realized how long this post is already. I’m sorry. If  you’re still reading this, points to you.

Now we get to the “legs like garbage” part of the week. Most season I’ve used the Pfitz plans, I’ve had trouble finding a longer race and have probably either skipped them or run a 5k, and made that day my long run. But, finally — success!

That said, it sucked. I met two friends early and we ran down to the Ironman Louisville start, which was fun. A nice sunrise and we could see all the athletes lined up. We looped around the start area and after the cannon went off, we went across the Big Four Bridge. It was neat being able to see the swim from above. We did a loop over to the Falls of the Ohio, back across the Second Street Bridge, around the transition area for Ironman, then headed back. Both girls tagged out at 10 miles. Things had been going okay but I felt stiff and flat. I figured it wasn’t going to get better. I downed a gel and headed back out. I was parked in a part of town I’m not as familiar with — I’m not sure I would have gotten lost but I don’t have enough of a mental map to judge distances. So I headed back down to the Ironman course, figuring I’d now be able to see people coming out of the water and getting on their bikes. Super cool, lots of fun. Lots of opportunities to stop and take a break. But eventually, I made it. I even finished the run by running up a big hill. Were half the miles over 8 minute pace? Yep. Do I care? Nope. It’s done. Did I drink more Recoverite after? You better believe it. I think that stuff works miracles.

In total, 49 miles including a 10k victory and a 17-miler, plus three cross training sessions.