Clicking off the miles in June! Despite complaining to coach late last week that everything seemed hard, I’ve run well ever since.

We’ve reached the point in Kentucky summer where it’s basically 90* and 90% humidity every day. It’s humid and 70 even at 6 a.m. ALL THE SWEAT, ALL THE MILES.

Monday was an easy 6 from home with drills after (see last week’s post for links to good drill resources). I’m trying to build up to two or three drill sessions per week but I only got in one this week. I had a massage that evening too, which I was needing. I’ve been trying to maintain a schedule of going every three weeks — it makes a huge difference in my training.

With the heat, I’m working on shifting my speed work to the morning, which is always a struggle. I have a hard time hitting faster paces early. But it’s either that or the treadmill in the afternoon. And this week I had a work event in the evening so that wasn’t an option at all. Morning it is!

This was a good workout for the morning because there aren’t target paces. Just “hard.” It was a pyramid workout of hard intervals of 1 minute, 2, 3, 4, 5, 4, 3, 2, 1; all with 2 minutes recovery jog. The first three go by quickly and easily, then you hit the 4-5-4 section and those 2 minutes are suddenly so short! This is probably one of my favorite workouts, though.

Wednesday morning I met a friend for some easy miles out at The Parklands of Floyd’s Fork, an incredible gem here in Louisville. I also taught Pilates that evening — the first of four classes for the week.

I had a light progression run Thursday — 3 miles easy and then 4 miles getting faster each mile but not going over 85% max HR (which I did but not until the very end!), 1 mile cool down. I like the Thursday turnover workouts where I feel faster and like I’m getting some good turnover without a lot of recovery needed. It’s important for me to have some speed mixed in so I don’t get stuck in a rut of long and slow.

Thursday night is Pilates Strength night and we had a solid class, larger than normal and with some new people. I always love having new faces join in.

Friday was another 5 mile recovery day. Coach had originally called for 6 miles both days but after we spoke last week he told me to drop a mile or two off the recovery runs while I made it through my third week of extra Pilates classes. Plus, he had designated Sunday as an optional off or cross training day … and I’ve been running instead. (I’m on a 39-day run streak but I am not committed to it; I won’t jeopardize my training just to maintain the streak or do something silly like run 1 mile just to keep it going. 273 miles so far!)

Oh, Friday was also Muhammad Ali’s funeral procession and memorial service here in Louisville. I posted some videos and photos from where I watched the procession on Facebook.

I kept Friday short and easy because I knew Saturday was going to be a doozy. Hot and humid + a 14-16 mile long run + 2 straight hours of teaching Pilates. Ouch.

I started my long run at 6:50 a.m. from the gym. The weather was okay, 67* or so, and I ran the first 7 smoothly then stopped for water and took a Hammer Gel (I took one before along with a couple of Endurolytes; no other breakfast). The next 3 miles were fine and at 9 I was even pumped and like, “I could run forever!”

Then it got hotter and the sun got higher and it turned into a sauna. I had a second water stop at 11 — still convinced at this point I was just going 14 since I knew Pilates would be tough. But then I added a little loop on and knew I’d be at least to 14.5 … and that means I might as well do 15! I took some “shade breaks” in the last few miles just to try and cool off.

I had time for a shower and some Hammer Recoverite before teaching. This was my third straight week teaching both Saturday classes and man, it’s tough. Mentally and physically.

After that my husband and I met up with British clients of his who are expanding to America and opening a distribution site in Louisville. We were originally going to take them down to Claremont for a distillery tour (hubs also sells to Jim Beam) but with our guests staying in hotels in different parts of the city, it seemed impractical (and the last tour is at 3:30, so we had some time restrictions).

So we took them downtown, where there are also some new bourbon attractions. If you want the full distillery experience, these aren’t it. But they’re fun and you get to try a bunch of bourbon!

After dropping the Brits off and getting home around 10:30 p.m., I was basically toast. And with a 6 a.m. wake-up call to run, that was for the best.

I met my friend Rebekah again Sunday morning — 6:30 a.m. — and we went a different direction at Floyd’s Fork (link to previous post about the park development) to see how progress is coming on another new section. This system consists of multiple parks all connected together, but they just opened another large section but the connection isn’t finished. I had said just 3 or 4 miles when I got there — sore from Pilates, dead legs from running, tired from being outside and having drinks all afternoon. But once we got moving it was a great run and we had to go far enough to see the construction! We ended up with 5 miles and walked almost another mile back. 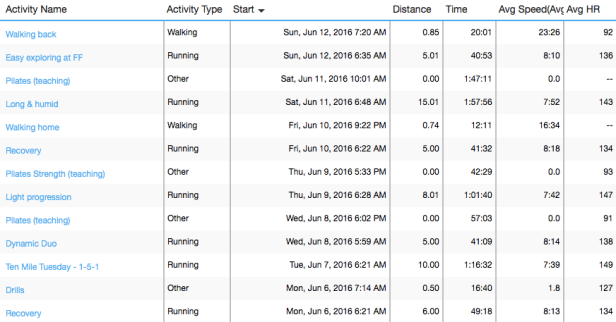 I’ve struggled with long run motivation the past few months — I’ve been doing them largely solo and I just don’t wanna — so I signed up for #ubhm on a whim, intending to use it as a quality long run before doing another half in November (tbd). @mattebersole gave me a logical, executable plan and I treated this like a long run, meaning I totally was winging it. I ate a @pickybars on my way, couldn’t find a bathroom before (regret), warmed up with @drkylebowling (too fast), didn’t do strides, etc. Standing on the starting line, though, there weren’t any women coming to the front and no familiar faces. So … I took it out faster than planned and decided to see what they say had to offer. The weather was perfect minus the wind, and the course ran better than it looked on the map. I ended up running quite a bit of the race with the other two women in the top 3, had a really fun time, and finished in second in 1:29:45. That’s almost exactly where I guessed my fitness a few weeks ago before Indy Women’s based on the training I’ve been doing. Now to pick the next one … 👀
Happy coach’s day @mattebersole! ⭐️ “A runner is a miser, spending the pennies of his energy with great stinginess, constantly wanting to know how much he has spent and how much longer he will be expected to pay. He wants to be broke at precisely the moment he no longer needs his coin.” #teampbt
Down-stepping into the weekend 😵‍💫 photo from the #triforsight duathlon a few weeks ago
When your coach says, “all your friends will be here!” >> Thanks for the memories @indywomenshalf 💕 So proud of the whole dang crew today including a bunch of baddies not pictured. (Including several who helped make this event so great.) 🍾 More later. ✌🏻 #teampbt #lifepoints #teamroadid #pickyambadassador
Excited to go for a ride with all the new parts installed on my bike 😬 Shoutout to @stage22performance — @bike.zen did a fitting for me recently and used those measurements to set up my new bars and seat. He also unstuck my old pedals and installed my Garmin Vector 3s. If you need a bike fit, reach out to him! 🚲
Pollinator garden still doing its thing 🐝 #kymasternaturalist #kymn
Loading Comments...
%d bloggers like this: