I finished this week grateful to be getting some miles in. Recovery is really important but it also takes me away from the thing I love the most. This week was still pretty light but I did get some strides and some more moderately-paced running, both to start incorporating some speed again.

Monday was an easy 4 late in the day after I went to the orthodontist. (Cracked the cement around a band, whoops. Six months to go!) Not much to note other than the fact it was 64* and cloudy and that’s pretty perfect.

Tuesday I ran in the morning, 6 miles plus 8×30-step strides. It was nice to feel a little pep coming back.

I had Wednesday off from running but I did get in a 2k row and taught an hour of Pilates.

Thursday morning was another 6-mile run, “moderate,” so a little higher heart rate. I averaged 7:22, which was a lot faster than I’ve run since the race. It was a surprising 45* out and fortunately stopped raining as I headed out. I’m not used to long sleeves and capris in May! This was a nice solid run and reassuring that I haven’t lost all my zip. Thursday evening I had Pilates Strength to teach and everyone worked really hard!

Then Friday was Oaks Day, basically a local holiday. I ran early from the gym, just 3, and then rowed 3k. (I was going to row 5k so that it was a 5k on both distances but I didn’t think I had time. Next time!) I got off early and enjoyed a nice afternoon outside reading. Hubs and I walked to dinner and back, where I ate way more than the calories I burned walking there. Mmmmmm Spanish Bleu Burger…

I had my “long” run on Saturday — 8 miles! Double-digits, here I come! It was a nice morning and I woke up early — which will continue to happen all summer with the early sunrise — so I ran a nice loop from home, ended at Starbucks and walked home. I had plenty of downtime before heading to Milestone to teach the Saturday double for the second week in a row — the beginner class at 10 and the intermediate class immediately after. Almost two straight hours. Brain fried.

While we’re not much for going to Derby or going to parties, we hung out at home through race 10, then went to 3rd Turn Brewery for a couple beers and the main event. Hubs hit the trifecta on the Derby! Pretty exciting. Of course, that brought us back to about even for the day, haha.

So, coach had actually only scheduled me for four runs this week, with Sunday as a cross-train, flex day or off … and a couple of other days were “flex day.” I’m just going to pretend like running is a flexible option.

Because I ran Sunday, too. Six of the seven days, instead of four. Sorry coach!

I met up with a friend Sunday and managed to mostly miss the rain. She’s a new mom and I was excited to spend a little bit of her first mother’s day with her. I had pitched 3-5 miles, with 3 needed to hit 30 for the week. After 4, she was feeling good and so we did another mile — her longest since the baby was born. We’re shooting for 6 miles before he hits 6 months in a couple weeks! 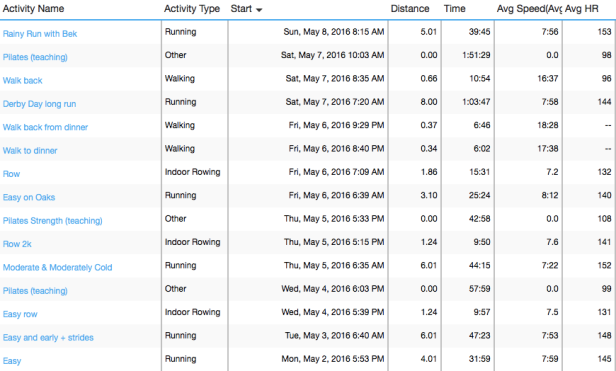