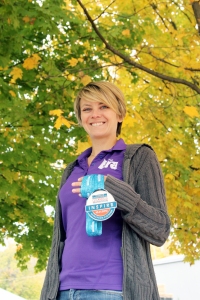 My running career took off like a rocket about six years ago — unfortunately, it fell back to earth just as quickly.

After struggling for the past two years, I can’t decide if I’m on the verge of a comeback or if I’m just delusional.

I started running in 2006 just to achieve some semblance of fitness. I’ve always been petite, but thought it was embarassing for someone who weighed about 100 lbs. to be winded after two flights of stairs.

So I started following the ever-trusty Couch-to-5k plan from the folks at coolrunning.com and ran my first 5k that fall. All I wanted to do was run under 30 minutes. I crossed the finish line about two-and-a-half minutes under, and I was hooked. I ran probably a dozen more 5ks over the next four months.

In the spring of 2007, I decided to take on Louisville’s Triple Crown series, a 5k, 10k and 10 miler, and the Kentucky Derby Festival miniMarathon.

I made it through that first half-marathon in April 2007, then ran another one in October.

And then I ran a marathon in December. And qualified for Boston.

Yes. At age 22, just 18 months after I started a walk-jog program, I ran a qualifying marathon.

Let me be honest — I have never been as seemingly good at anything as I am at long-distance running, and I’m not even that great at it.

I ran six marathons before imploding.

We all know that’s not how running works, but I was young and naive — and pretty soon, I was also hurt.

I ran a fast marathon in Virginia Beach in 2010, but an oddly-located stress fracture (anterior tibial cortex) led to a pulled hamstring and other little injuries. The hamstring, well, hamstringed my running for nearly a year.

Then, I just couldn’t find my mojo. I’m not sure how many marathons I signed up for and didn’t run. At least three.

I started to think my marathon career was over.

But all my friends were training for fall marathons and my regular partner-in-crime was looking to do her first in a couple of years, too.

We decided to head north, to Columbus, where the course is flat and the weather cool.

I don’t like to put all my eggs in one basket, but I did on this one. Before the race, I declared if I didn’t run within a certain range, I’d just do half-marathons in the future.

It was “Cbus or Bust” — finish this one or quit trying to do them. If nothing else, signing up for fulls and just running the halves was starting to get expensive.

Suddenly, I was getting up at 4:45 a.m. to meet friends to run. I was doing speed workouts — by myself, at 6 a.m., in the rain. When someone tried to convince me six miles of tempo was enough and that I could drop the seventh mile, I refused.

And so, I toed the line of the Columbus Marathon on Oct. 21.

I was pretty sure I had forgotten everything I once knew about running a marathon. In hindsight, I’m not sure I ever knew anything.

I didn’t really set a time goal for the race — I took a guess at what pace per mile I thought I could sustain if things went great and figured I’d go out around that speed.

I had B and C goals, too. One was to run faster than my slowest marathon.

Realistically, I couldn’t have asked for anything more. The weather, course, crowd support and race in general were all amazing.

The only not-so-amazing thing was how hard I fell apart around mile 18. I had been running faster than planned but feeling comfortable and in control, but when the wheels came off, they came off hard.

I posted some ugly splits on those last few miles but when I hit the finish line, what I felt most was relief.

I managed to dry heave and tear up within a 200-meter stretch, although I doubt much fluid would’ve made it out my mouth or my eyes.

It was a strange mix of emotions.

Happiness and relief that I had finished after a 30 month marathon hiatus. Disappoinment that I hadn’t hit my time goal, especially after thinking I could easily beat it for five or six miles. And add a twinge of regret that, despite finishing with a decent time, that time was still 15 minutes slower than my last marathon.

Writing this a week after the race — long enough to sort through it all — I can say the answer to both questions is yes.

Now, the question is, which race do I run in the spring?

I’ll have to wait until 2014 to go back to Boston, so I might as well try to improve between now and then. If you have a suggestion for a spring marathon within eight hours of Louisville, comment below.