This was a fun week! I tried something new — racing on the track. But we’ll get to that. Significant drop down week — races this week and next, oh boy. Probably my lowest mileage week all year. Also this week I started incorporating some heat acclimation work, although I’ve run in everything from 50* to 80* this week.

Monday: 6 miles easy in the morning, 46 min / 146 AHR. Massage and Jasyoga in the afternoon. All around good day.

Tuesday: 8.5 miles, 63 min / 160 AHR. The really high heart rate should be a clue something about this just wasn’t right. I don’t know if it was the large tea I had in the afternoon or what, but I felt antsy when I started the warmup. A lot of the time that’s good and I run well. This time, not so much. It was 75* and I am definitely not used to that yet. I had 2 miles to warm up with some strides, then 3 miles progression that should’ve been starting at marathon/half marathon pace and working down to 5k/10k pace. Basically I went out at HMP and blew up. Last mile was ugly. Then I had 6x 30 seconds on / 60 seconds off, and those were totally fine. Not sure what the reason was, but wasn’t a great day. Foam rolling and legs up the wall while watching the Spirit of the Marathon II.

Wednesday: 6 miles in the morning, 49 min / 150 AHR. I forgot my chest strap so that’s optical HR and it was reading 173 at one point so I think it’s probably a little high. Taught Pilates that evening.

Thursday: 6.5 miles after teaching Pilates Strength, 53 min / 143 AHR. Met my bestie for most of it; strides at the end. 80* and windy but dropped a few degrees by the end. Did not add clothing for this one!

Friday: 4 miles, 32 min / 145 AHR. I thought all day that it was 4-6 and I figured I’d do 6 unless I felt terrible … and then I got to the park and saw it was only 4! Also got a late start because of work (was going to go in the morning but slept in instead) so the shorter distance was nice.

So after our big local 5k ended up being hella short this spring, I felt a bit cheated. I decided I wanted to run another one, and I thought it would be fun to run one on the track. Never mind that the two seasons I ran in high school I primarily ran the 100 and the 200, with maybe some 4×400 legs thrown in. I found a  local D2 meet that was accepting unattached entries, and coach said he thought it was a good idea, so in I went!

On Friday, I still hadn’t received the final schedule and heat sheets (which I was told would be emailed Thursday), so I sent over a message. I got a quick email back, and found out they had enough entires to break the 5000 into two heats. I was in the second slower heat that would race in the afternoon. I skimmed the heat sheets and realized I should be in the earlier heat. Fortunately, it was easy to get changed. (The open athlete registration didn’t ask for a seed time, and I asked them if I needed to provide one, but didn’t get an answer. Since I had no seed time, they put me in heat 2.)

The weather in Louisville was pretty crappy considering it had been hot and sunny all week. Instead, it was in the mid-40s and raining and windy. Terrific.

But, not long after I arrived at the beautiful Owsley B. Frazier Stadium — built just 10 years ago — the rain let up. I had plenty of time to chat with some college kids I know, one of whom was the top seed in my race, before warming up.

I did a 3 mile warm up with the first 2 miles on the track in lots of layers. I think the heat acclimation thing must be working because I was freezing! I did the last mile off the track while the men’s race was underway, then some strides in the infield after I changed into my flats. My warm up was nice and slow and relaxed and my strides felt good.

I decided to race on the track because I wanted to run fast. But after a rough couple of weeks, I knew I also needed it to reset myself mentally. Maybe throwing myself into a race with a bunch of young 20-somethings seems like a weird way to do that … but whatever.

Unlike road races, there’s not a lot of pre-race directions and taking-freaking-forever to start the race. They lined us up, told us it was a two-command start, and fired the gun.

Coach had given me two sets of directions. First, “run 45 seconds for every 200 including the first one.” And second, “Run fast, have fun.” I resisted sprinting to the front of the pack, and came through the first 200 in 40 seconds and 85 seconds for the first 400.

For the first couple of laps, we were bunched up and running 2-3 girls wide. After that, it strung out. There was a little bit of back and forth but around midway through the race I was in the second pack with a couple of other girls. 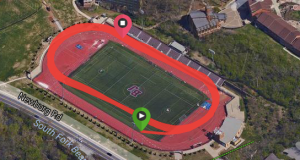 Two nice things about track races: first, someone calls your splits every 200 meters. This helps if you actually know what they should be — I knew mine for the first mile but not thereafter, and I’m not doing that kind of math while running 6 minute pace. Second, there are coaches, teammates, parents everywhere constantly shouting encouragement. Even if it’s not intended for me, I appreciated it! Early on a coach called to her girl, “How bad do you want it?” And by now most of you probably know that book stays on my nightstand. YES.

Anyway, TL;DR; we ran a whole bunch of circles. I was in the front of one group and too far behind the lead pack to even see them to try to catch up. With two laps to go the girl I had been running next to pulled away. I waited until the last 400 to really push. I finished in 18:57, only my second time under 19, and 6th of 12. (The later heat would be won in 19:16; I’m glad I was in a group that helped pull me along!) I also like to think that I won my age group, thank you very much.

Talked to more people and eventually did my 2 mile cool down, which included running up a huge hill but then discovering there were giant chairs up there and I had to use my hat as a tripod and take a photo.

It was a super fun experience, and I loved it. I actually liked just running laps because all I had to focus on was running. Not, are we going the right way? Is the course going to be long? Oh, there’s a bicyclist in the path. Wait, let me hit this tangent and avoid the pot hole and the train tracks! Nope. JFR.